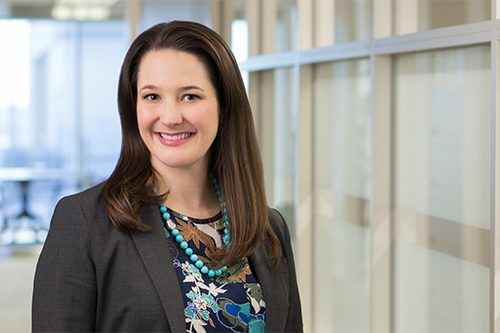 “My favorite part of practicing law is helping employers navigate the complex world of employment law and create policies and practices that work for their employees and their business models.”

Ashley has a diverse employment law and litigation practice encompassing a wide range of disputes and advice and counsel matters. Ashley represents employers in all varieties of employment law disputes, including claims arising out of Title VII, the Americans with Disabilities Act and the 2008 Amendments Act, the Age Discrimination in Employment Act, the Fair Labor Standards Act, the Texas Commission on Human Rights Act, and Texas wage and hour laws. She further provides advice and counsel to employers in all aspects of employment law compliance. On the business litigation side, Ashley routinely represents clients engaged in contractual disputes, as well as litigation involving trade secret misappropriation, breach of fiduciary duty and other business torts.

Ashley grew up in the Dallas suburbs and is a proud “double pony” completing both her undergraduate and law school degrees at Southern Methodist University. Ashley graduated from SMU’s Dedman School of Law in 2006 where she was a member of the Board of Advocates and distinguished herself as a national mock trial champion. After practicing law in Dallas for several years, Ashley moved out-of-state in 2010 due to her husband’s military service and is now admitted to practice law in North Carolina, Virginia, and the District of Columbia. She moved her family back to Texas in 2014 and calls Dallas home with her husband and two boys.